I love this top! First, it's purple.  Second, it's designed by the phenomenal Paco of Barcelona. Go HERE to see the pattern.  Third, the knit rayon/lycra fabric is perfect.  It drapes well and doesn't sag, due to the lycra content. 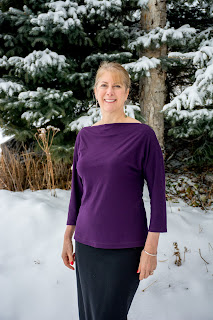 To construct  the neckline, you are told to sew in some stabilizing tape at both the back and the front.  I used fusible tape and it worked well.  It's applied on the facing side so an imprint of  it doesn't show on the outside.  I bought my tape years ago from Judy Barlup (now retired), who called it Japanese tailoring tape.   THIS  product now for sale on Amazon seems to be very similar.  Once applied, the fusible tape does not show on the outside, as it's fused to the facing side of the fold at the neckline, in both the front and the back.  It controls the stretch, thus allowing for the 'straight across' front neckline look (without the tape, I feel that the neckline would end up draping, and therefore looking more like a cowl...not bad, but not desired here).

I thought this pattern was very well drafted - it went together easily.   I used my baby lock cover stitcher to do the sleeve and waistline hems as well as the neckline in the back. 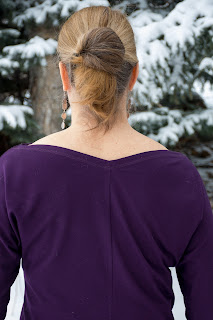 On Saturday evening, here in Alaska, we had a nice snowfall.  Right after we took this picture, on Sunday morning, Nick and I did our house chores, then changed clothes to go cross country skiing at Beach Lake, near our house.  This is just one of the reasons we love living in the Anchorage, Alaska area.  The outdoor quality of life here is phenomenal!

Eventually, I'll make the skirt too, to go with the top.  I really like everything that Paco Peralta designs, and I'm thrilled that his designs are featured in Vogue Patterns.

Right now, in the sewing room, I've moved on to a simple T-shirt dress using some wool knit from Italy that I have left over from another project.
Posted by Barbara at Cat Fur Studio at 6:07 PM 1 comment: 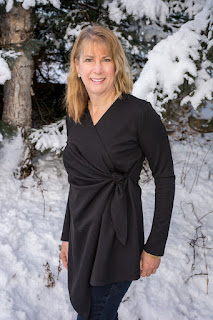 This knit jacket from the Christine Jonson Travel Trio One pattern is 'the bomb'!  I have been making this pattern for years - ever since it was released eons ago.  I love it for office work and for travel, where you have to fly and be 'presentable' immediately upon landing.   The construction is super easy using a serger. 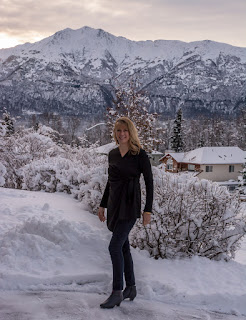 Posted by Barbara at Cat Fur Studio at 5:56 PM 5 comments:

Here's my version of this pattern, Duster Dress & Sash, from my friend, Paco. 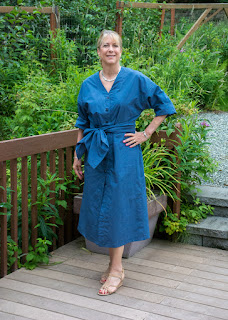 I used a blue cotton shirting.  This dress is very loose fitting, and I love how the sash draws it in at the waist.  I made the size 'medium'.  This dress is  very comfortable to wear at work today. 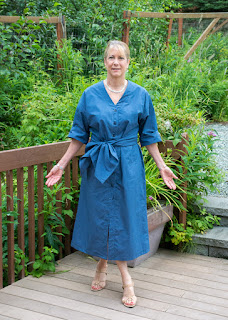 I've made this top, the "Mighty Aphrodite" from Hot Patterns five times now, and I still am not tired of it. In fact, tops I made several years ago are finally starting to wear out, but I still LOVE this pattern!  It fits well, I love the look, and it's fun to make. 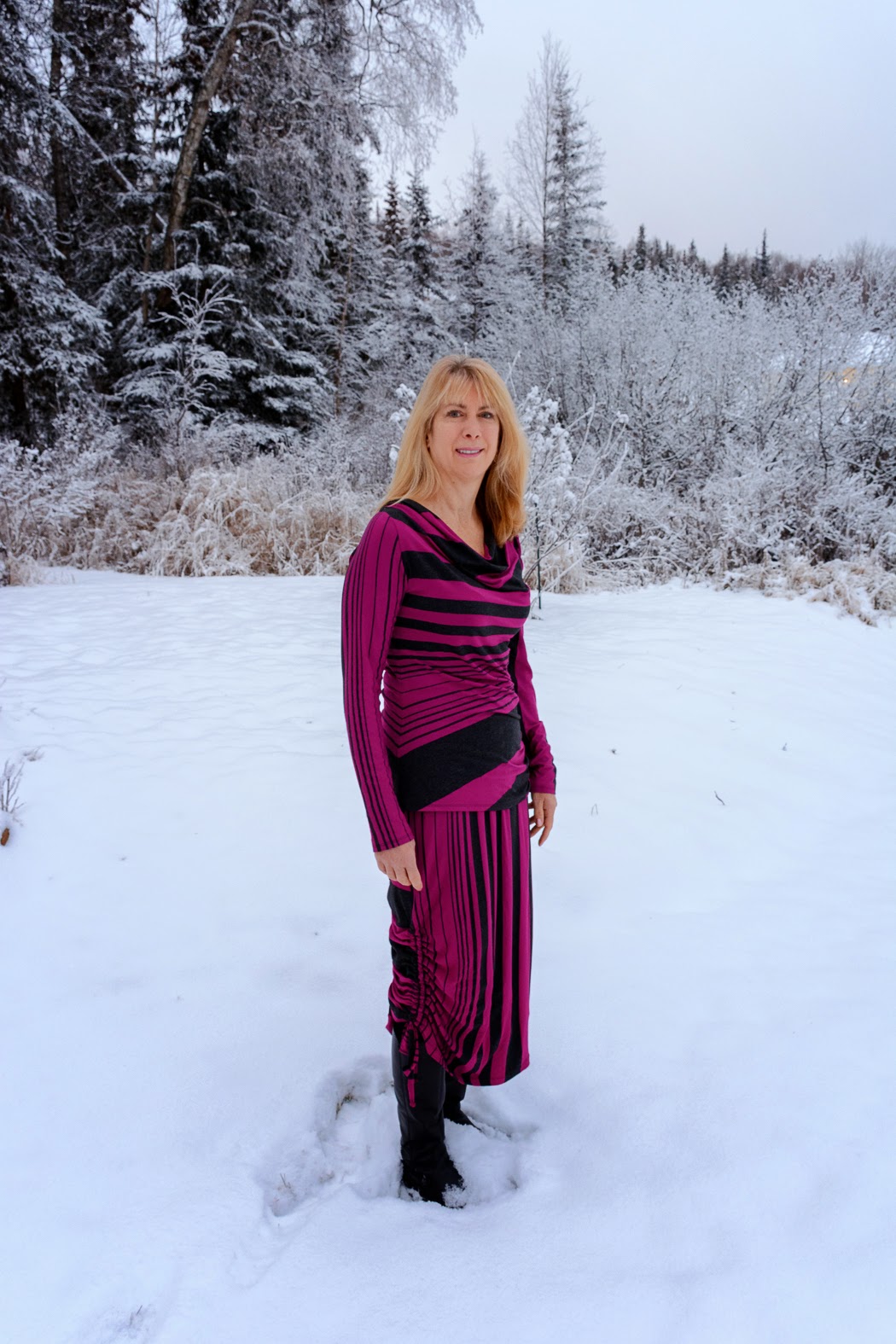 This past August, while visiting in the East,  I bought a haul of fabric from Mr. Kashi at Metro Textiles in NY.  I brought it back to Alaska, and  I've sewn up all but two pieces of it now.

This piece, a striped rayon, was super appealing to me, and I thought for quite some time about what it would become.  I love the fabric so much that I didn't want to mess it up! 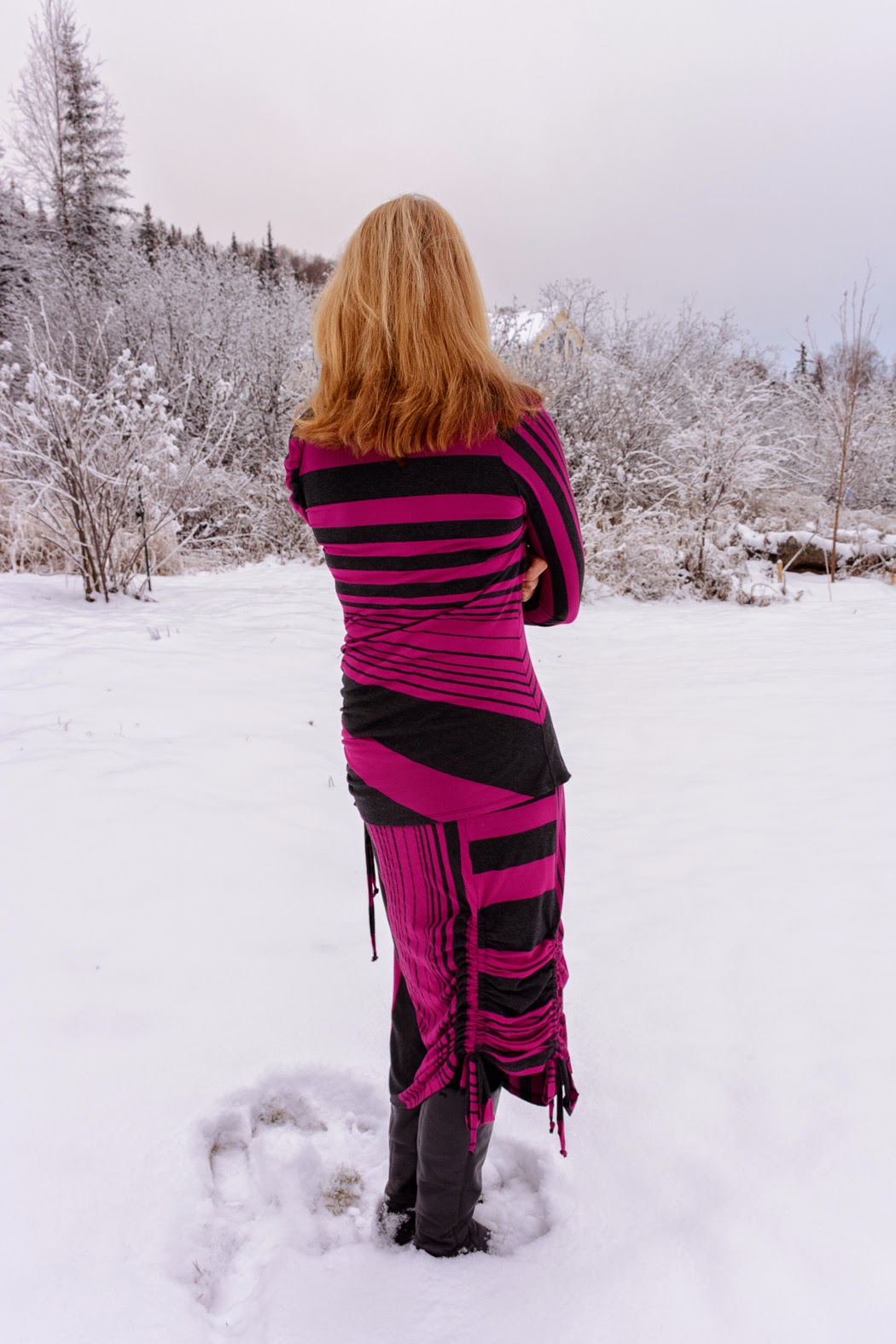 I made a matching skirt, echoing the drawstring from the top in the skirt.  I used vertical stripes for the skirt, with a horizontal inset, bordered by the ties. 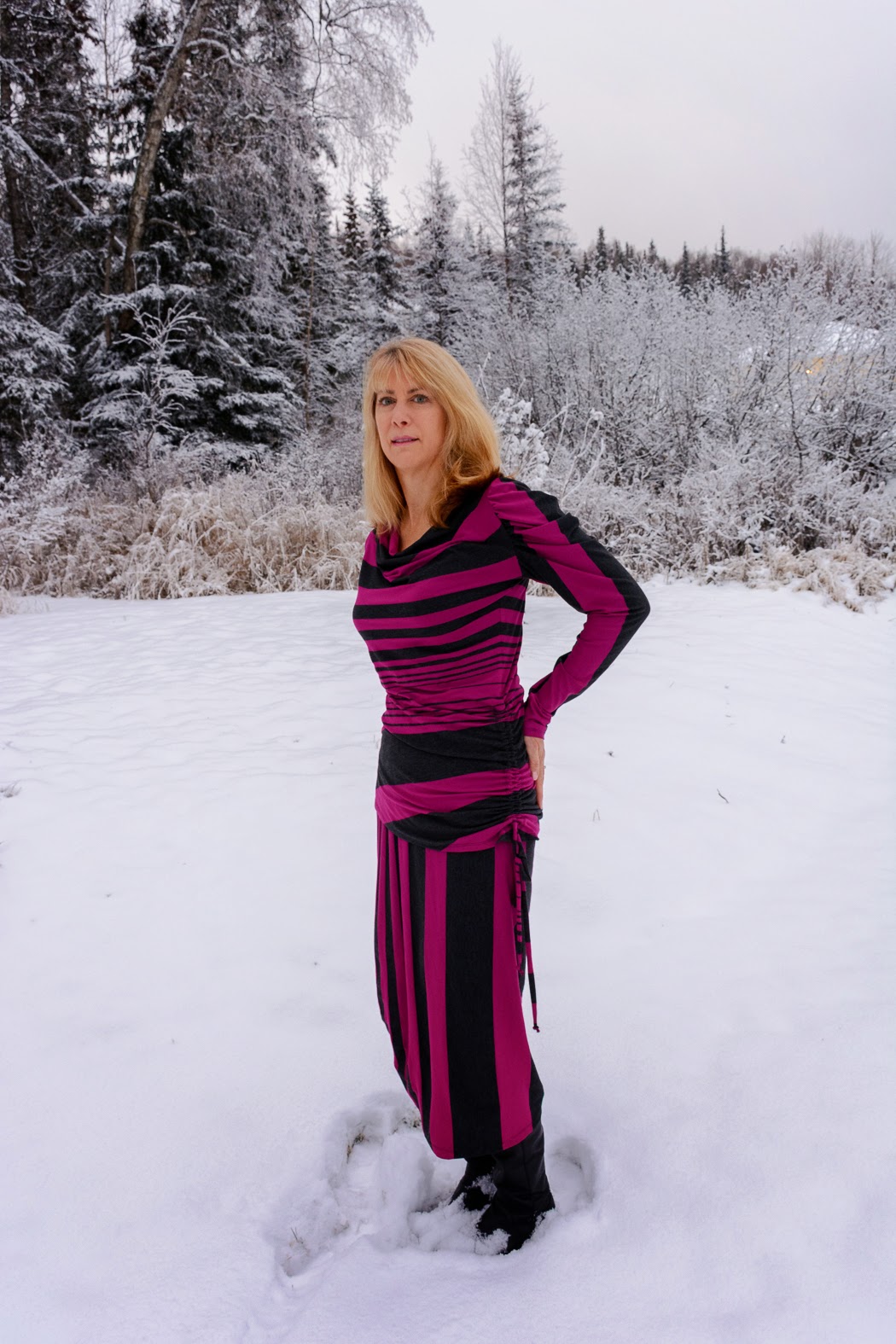 It snowed here in south central Alaska last night, and we're celebratingly happy because we have not gotten much snow this season... until now. This snow is going to be a nice base layer for skiing!

Posted by Barbara at Cat Fur Studio at 4:09 PM 1 comment: 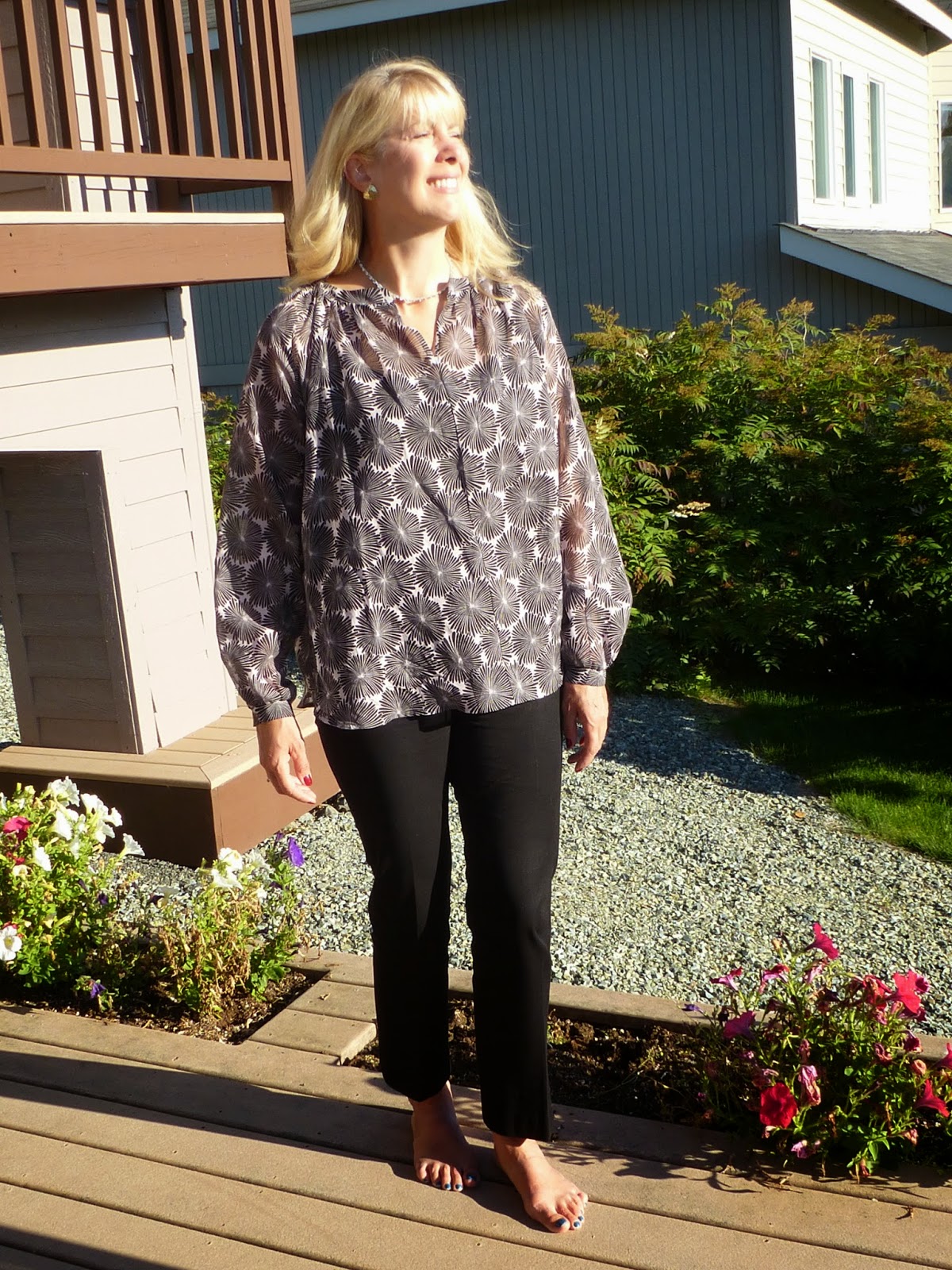 The warmth of summer is waning here in Alaska, but it's not too late to enjoy a lightweight cotton top!  This is the Classix Nouveau Refined Peasant blouse from Hot Patterns. 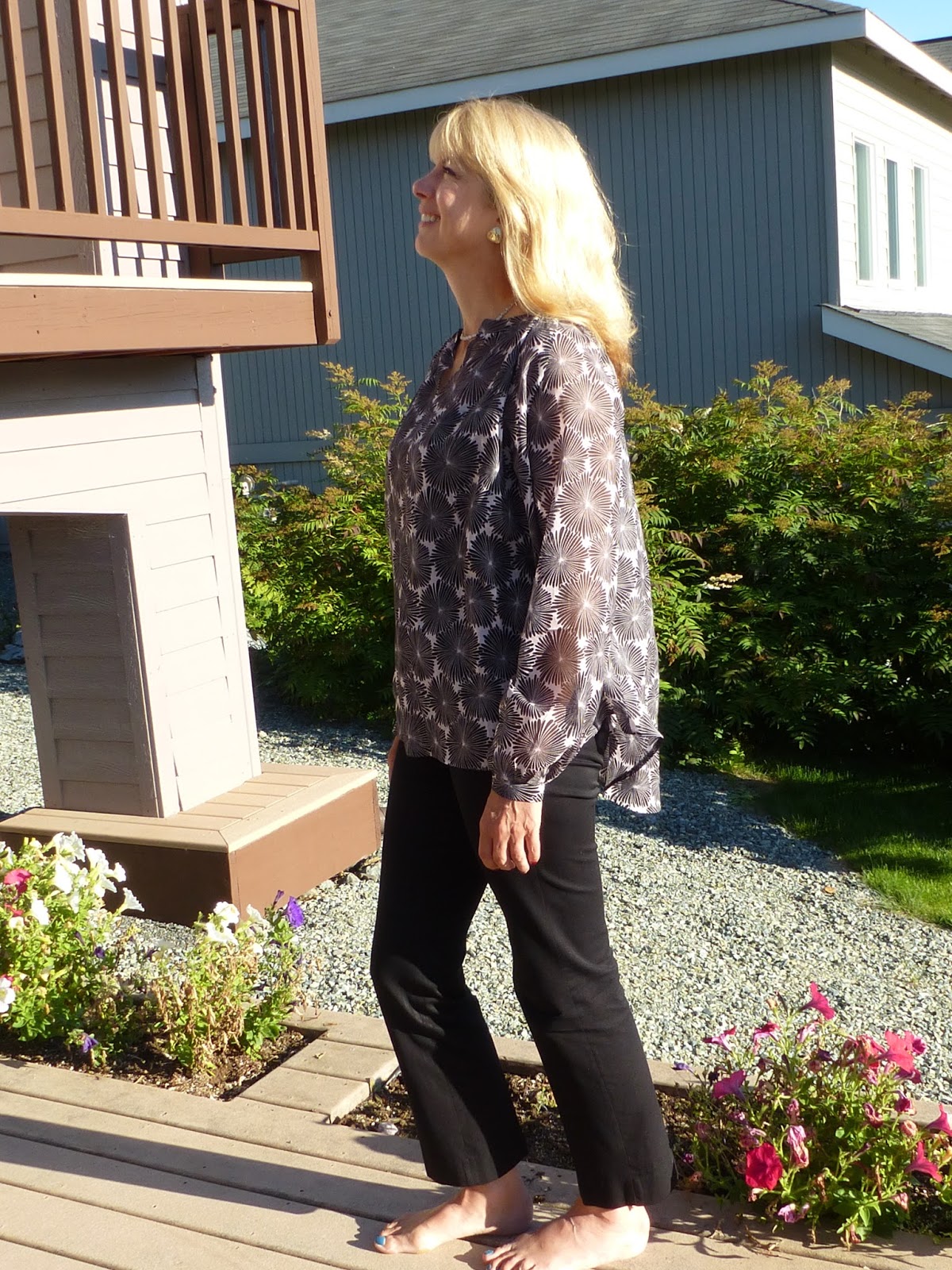 My fabric came from Mr. Kashi at Metro Textiles.  I bought this about two years ago.  It's a lovely floaty cotton.  I wore this all day today, so this is what it looks like after a long day at the office, partly sitting in sweaty meetings.

Speaking of Metro Textiles, I was in NY two weeks ago, and paid Kashi a visit.  I got a load of lovely knits for Alaska wear!  I also went to Sposabella with my niece Christine, my parents, and my sister, because I'm making Christine's wedding gown!  We picked out our fabric, but I am waiting until the muslin is finished, approved and fitted before getting the fabric.  It's Alencon lace and satin.    The basic design is going to be a takeoff on Princess Grace's gown -and I'm using this pattern as a base.  And I think it looks pretty similar to the gown worn by Princess Kate at her wedding.

Back to my current project!   This top has lots of ease, but it's floaty and flattering when being worn, but it is a MUST to wear skinny pants or skirt underneath, so as to balance the look! 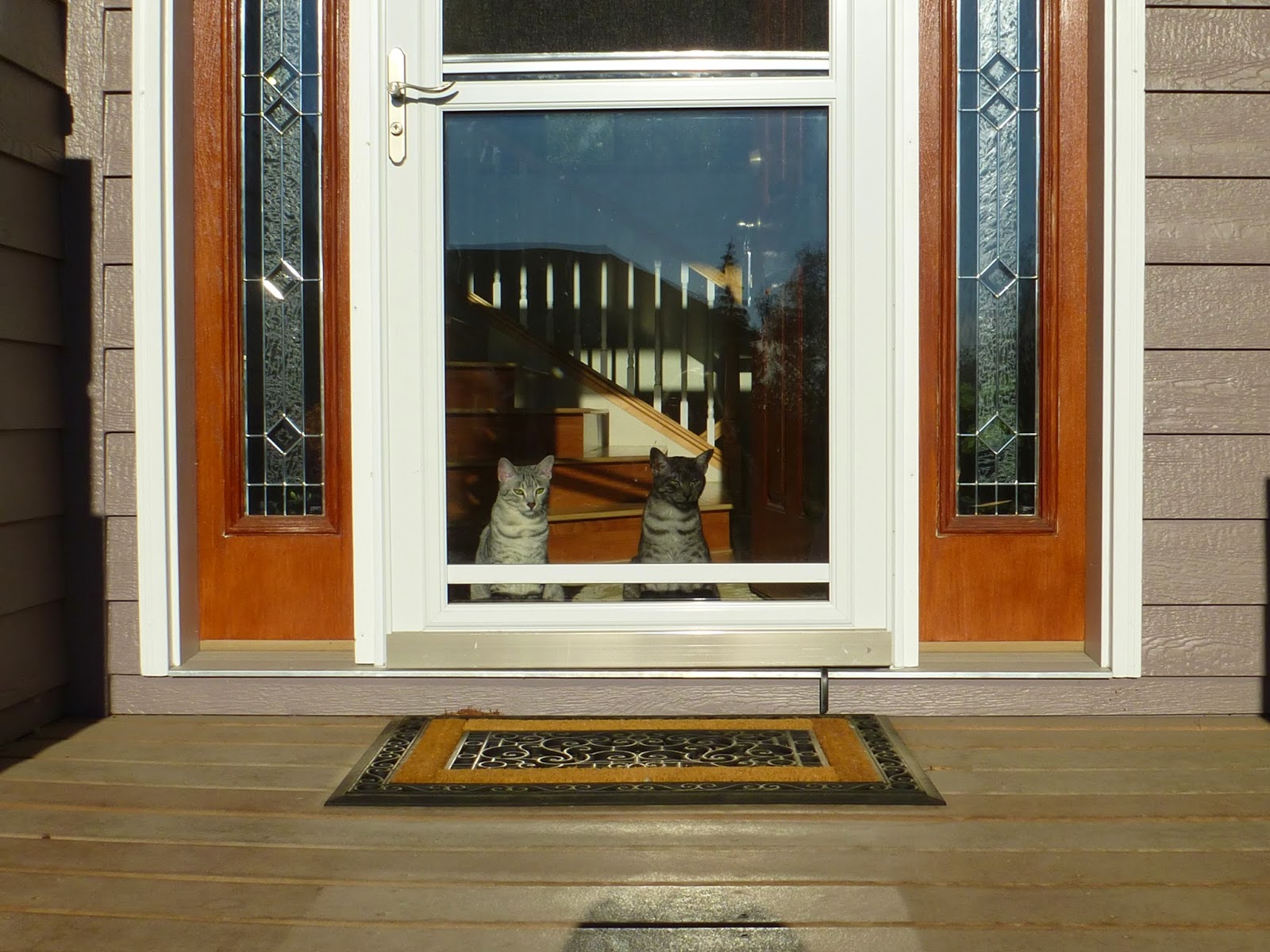 Nick took the photo on our front porch.  Smokey and Snowy supervised. 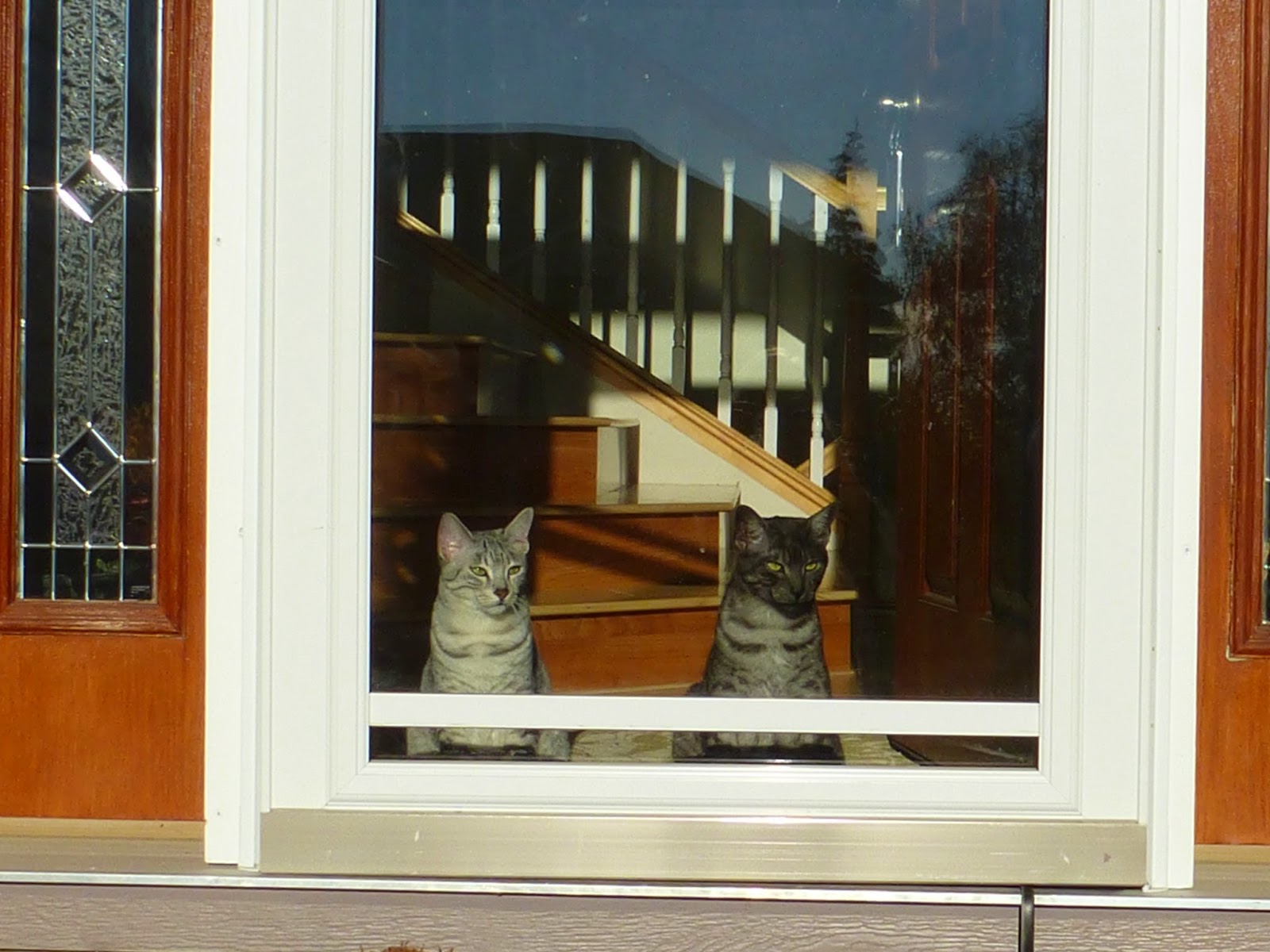 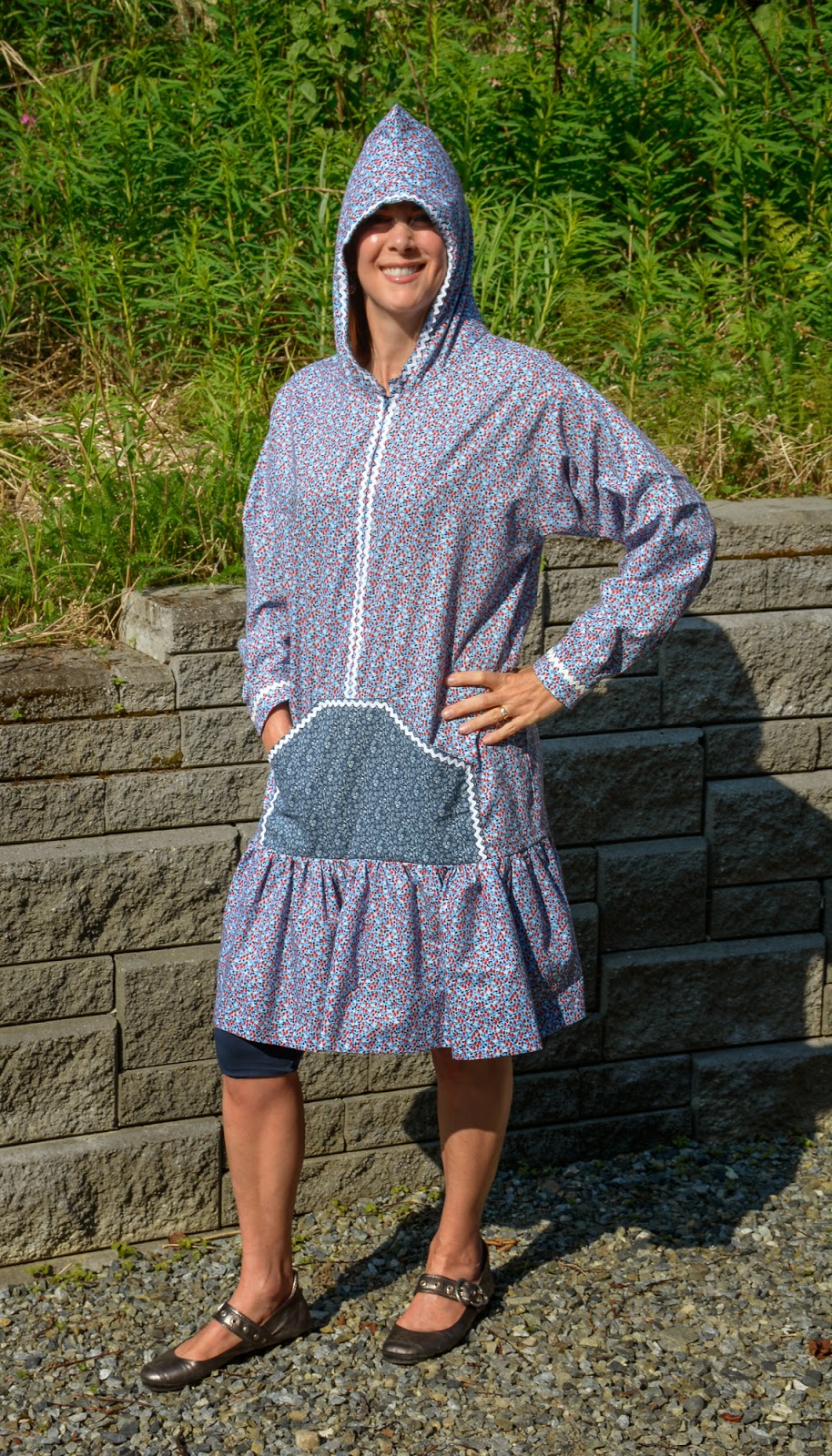 Since I live in Alaska, I wanted a kuspuk, which is kind of like a tunic traditionally worn by Yu'pik women here.  I have seen Yup'iks and other Alaskans wear these, but mostly, for dress and traditional cultural celebrations.  On occasion, I see women wearing them at places like the airport (and mostly, it seems,  these women are on their way to places like Bethel, which is a large Yup'ik village in western Alaska). 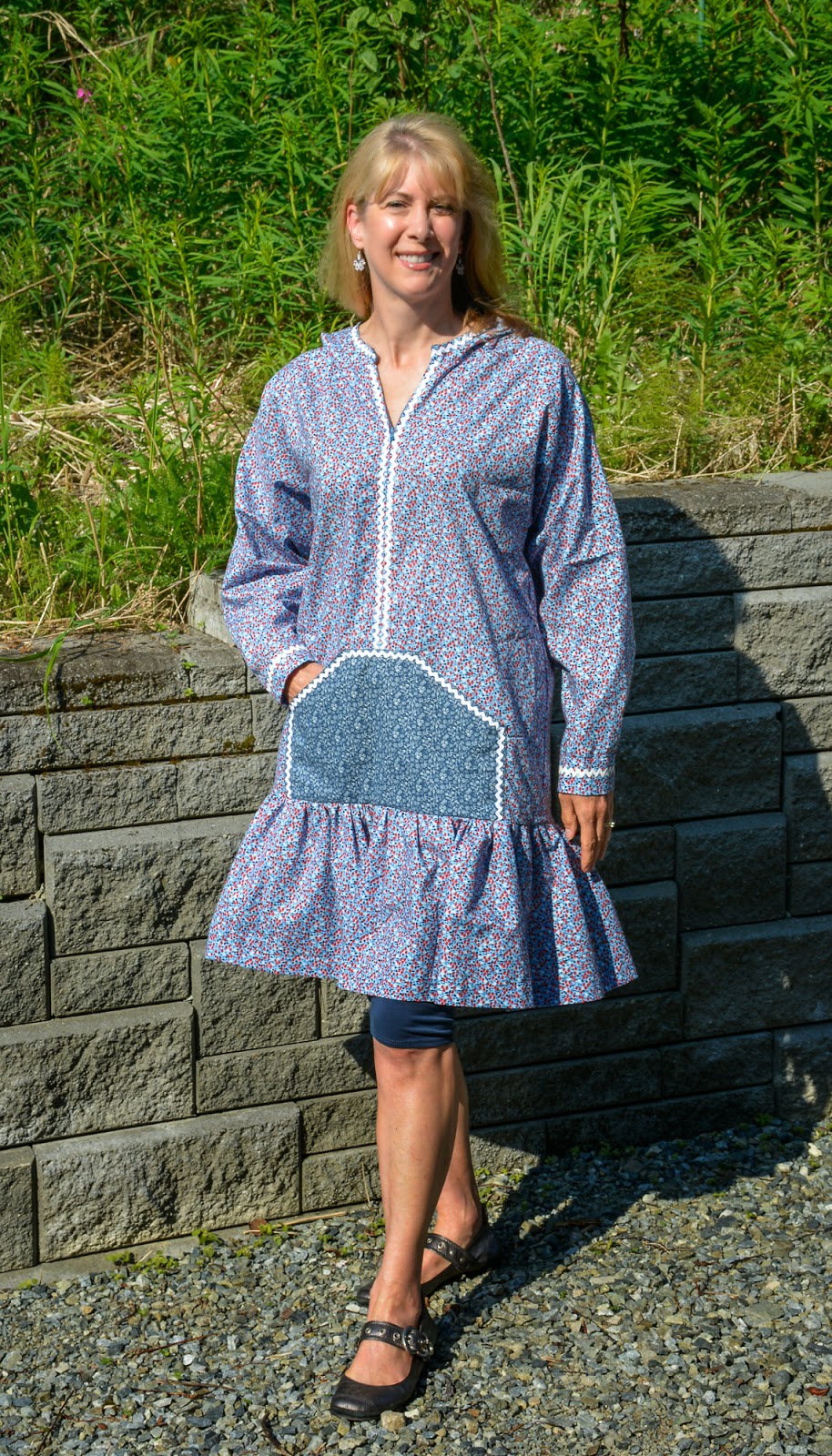 I made mine using fabric and trim inherited from Nick's mom, Carol.  She was an artist and a quilter, and when she died, I got some of her cottons. Most of these are now used up -  I  made a lot of aprons a while back and gave them as gifts.  But I have a few pieces, still, and the print on this dress is traditional for a Kuspuk -  usually they're made of printed cotton with rick rack trim, or similar other trim.

This is the pattern I used.  Being that I'm in Alaska, I was able to pick it up easily at a local quilting store.  I don't think they're easily found outside Alaska, except by webstore/mail order.  At least, I never saw one of these before I came to Alaska a year and a half ago. 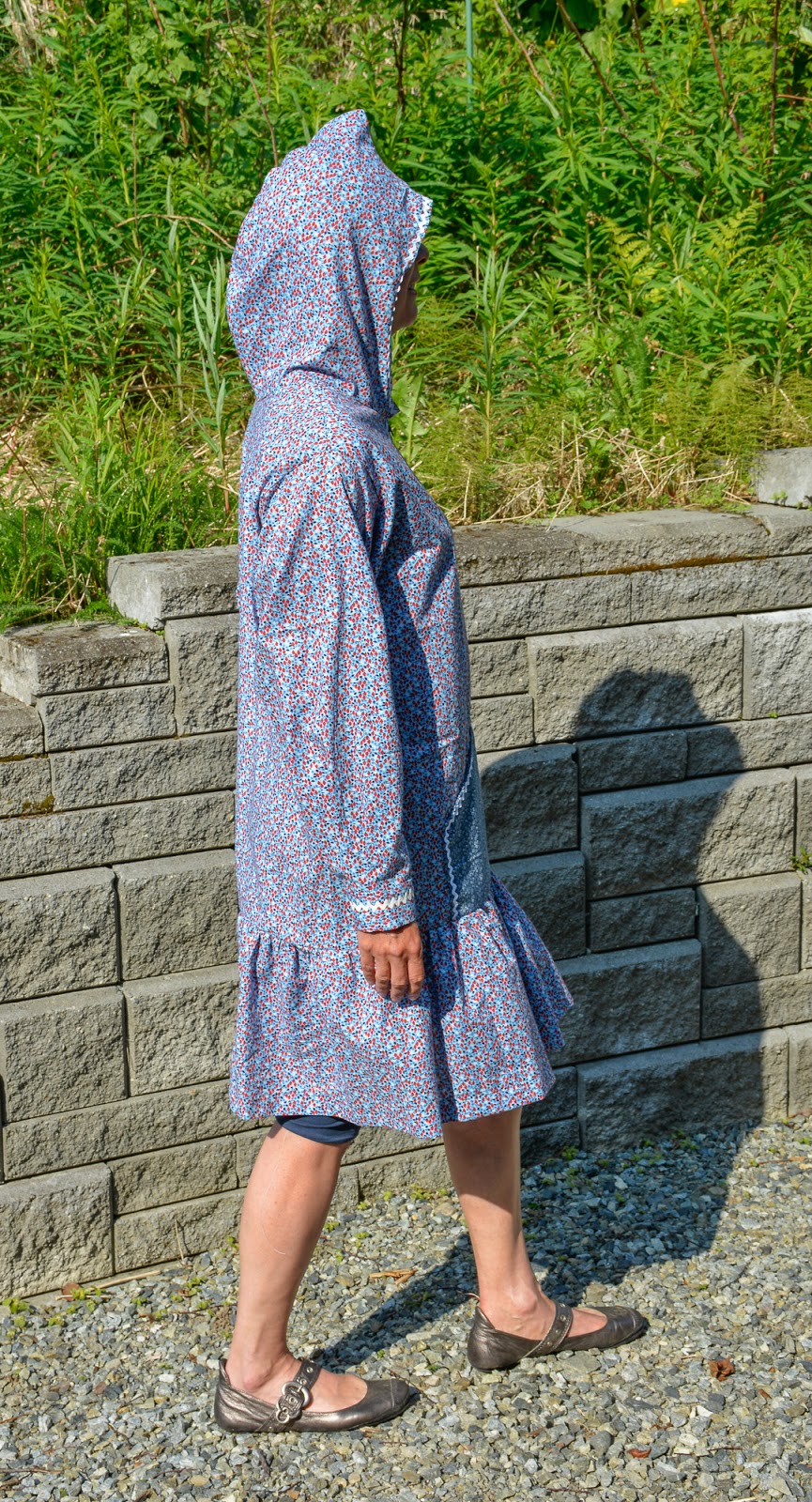 The pattern is pretty basic and not fitted,  but I found the  instructions are a little obtuse.  Since the design is not complicated, I just did what I knew would work.  I changed the directions around so that I sewed the zipper in on the flat, and made a few other construction order changes, such as hemming the skirt before it was gathered and attached to the body of the tunic.  This made it easier.  Also, I made the pocket much smaller than the version on the pattern.  The version on the pattern spanned the width of the front, which seemed wierd, so I made the pocket smaller.  There is a lot of variation in Kuspuk design, so anything would work, I suppose.  I do know from talking to Alaskans, that with Kuspuks, depending on who makes them, each maker might have variation on on hood shape, pocket placement, and trim placement, depending on where the wearer is from (that is, if the wearer is Yupik).  Being that I wanted to honor the Alaskan tradition of Kuspuk, but I am not affiliated with any one town or village, I felt I could use creative license, as long as I honored the integrity of the garment overall.

Here is a great website from a lady who makes and sells Kuspuks.  You can see here some different design variations. 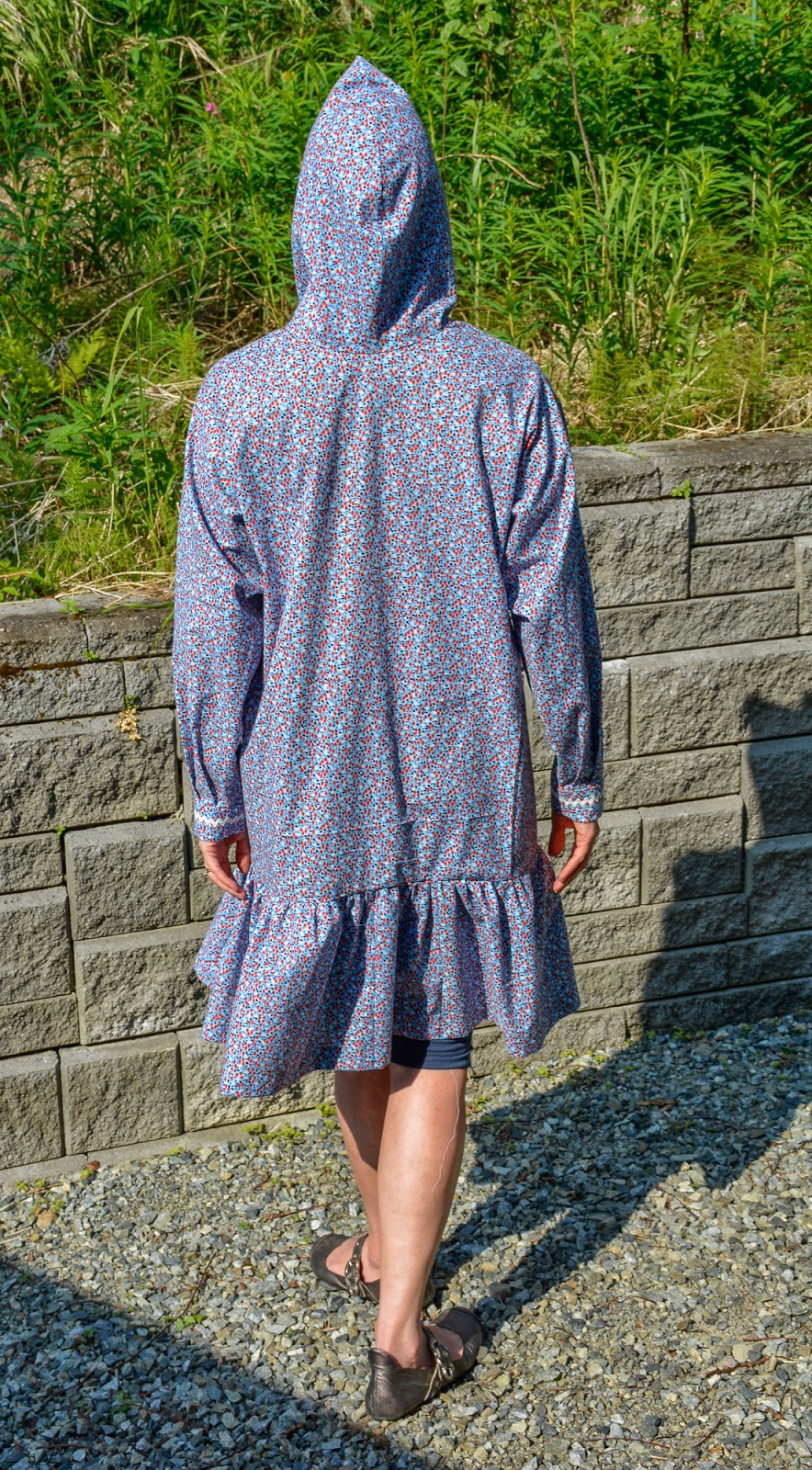 The hood is traditionally used to keep out bugs - and it is nice to have when the day gets a little chilly.  Mostly, I'm planning on wearing this inside, or in warmer temperatures.  But this evening (the first time I wore the Kuspuk), it got a bit cold outside, so the hood came in handy.

I think I will be making a second Kuspuk, but the second one will not be of traditional printed cotton.  I'm thinking a lightweight silk might be interesting.

Posted by Barbara at Cat Fur Studio at 1:25 AM 2 comments: 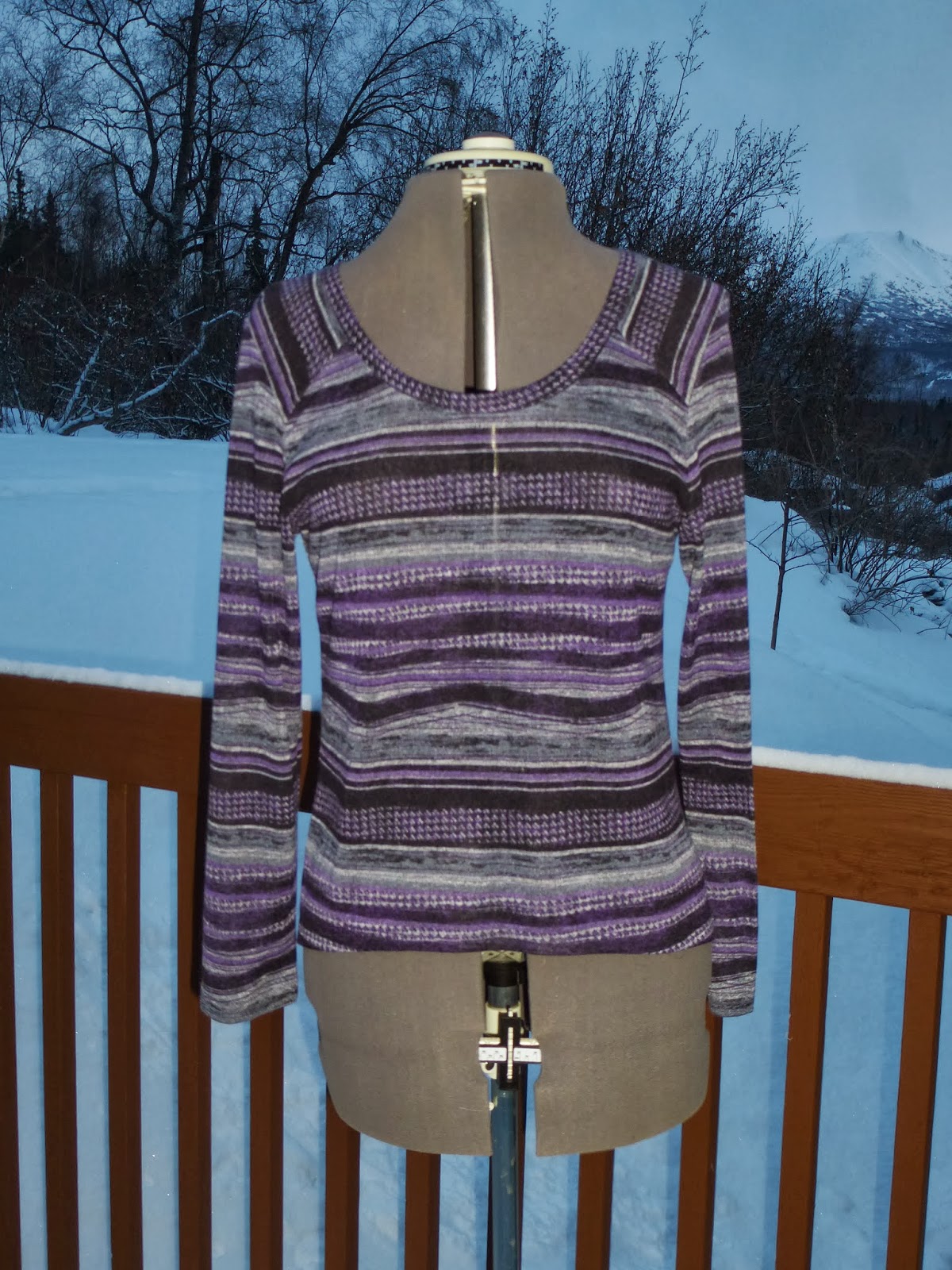 I like to study how different designers create simple designs different ways, and in my constant quest for something different, even when it's a 'simple' t shirt, I purchased this t-shirt pattern.  It's the "Guest Designer" Mimi G series from Hot Patterns.  I used a striped lightweight knit from my friend Catherine.  She gave this to me a while ago...maybe years ago?  Anyway, I love the colors, I love the fiber content (wool and rayon), and it's soft and elegant looking, I think.

Here are some things that make this t shirt pattern a bit different from others I've used:

1.  The 'hi lo' hem.  I've seen this look featured in some fashion magazines recently.  The front of the hem is high, and then curves to lower in the back. 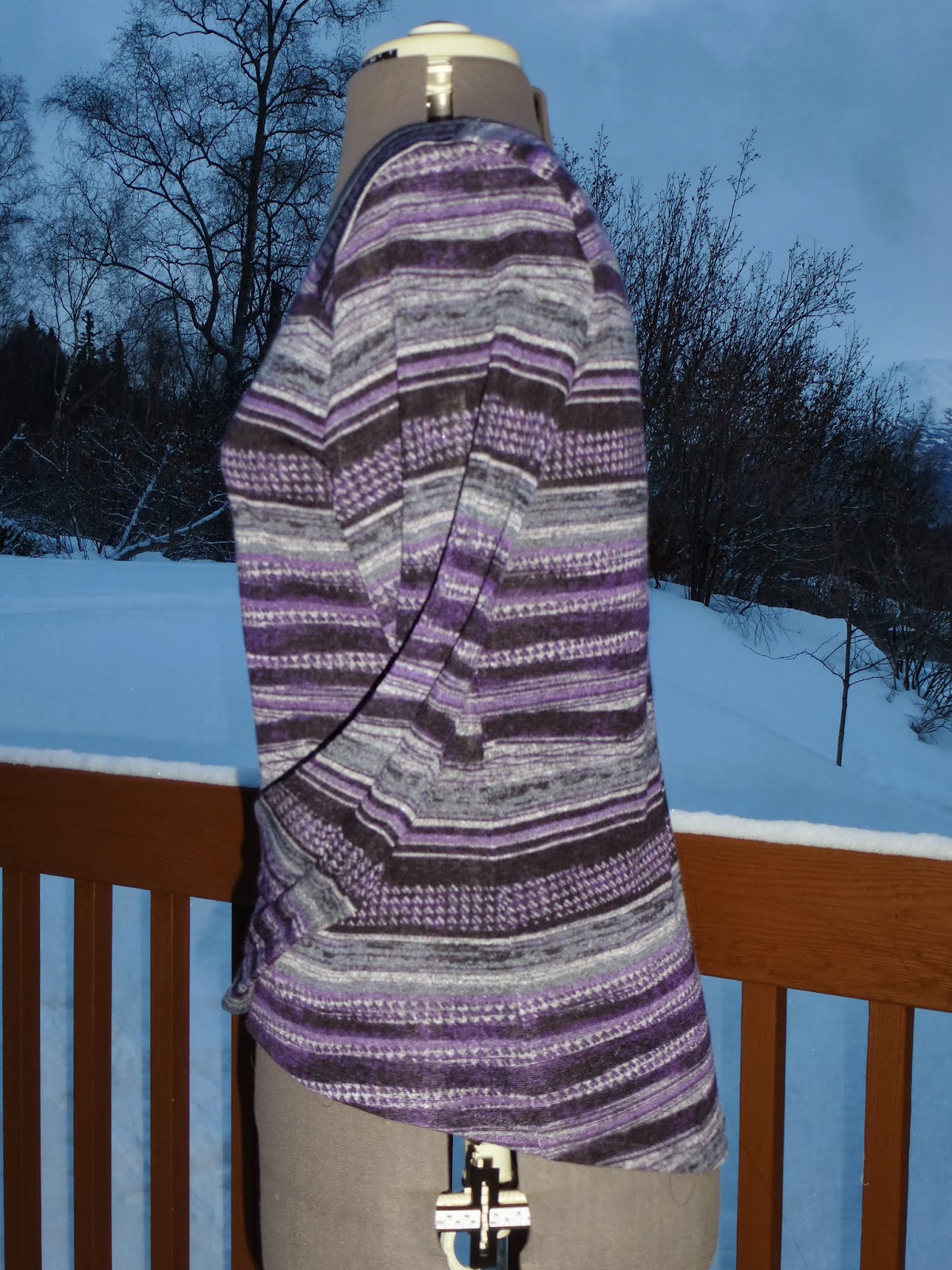 2.  The back seam is curved in at the lower back curve.  I sometimes put this in myself when using other patterns, and it was a nice feature to have built in to the pattern. This of course is a bit more flattering, as the shirt narrows in where I do.

3.  The little insert at the upper shoulder.  This gives an additional design opportunity.  To make it without the little insert is easy...just overlap seam allowances at the join.  In this case, I used the insert feature to add some design interest using the stripes.

Stripes can be challenging to match.  I hand baste like this to create stability of the seam and then when I machine-serge the seam, it doesn't slip.  In this fabric, one of the stripes zig-zagged.   Matching was impossible, so I just went with it.  Notice I put the zig zag at the waistline, so as to break up the stripe visually.  Thus, it is hoped, not 'widening' me when I wear this.  Horizontal stripes are widening, visually, but I believe the zig zag breaks this up. 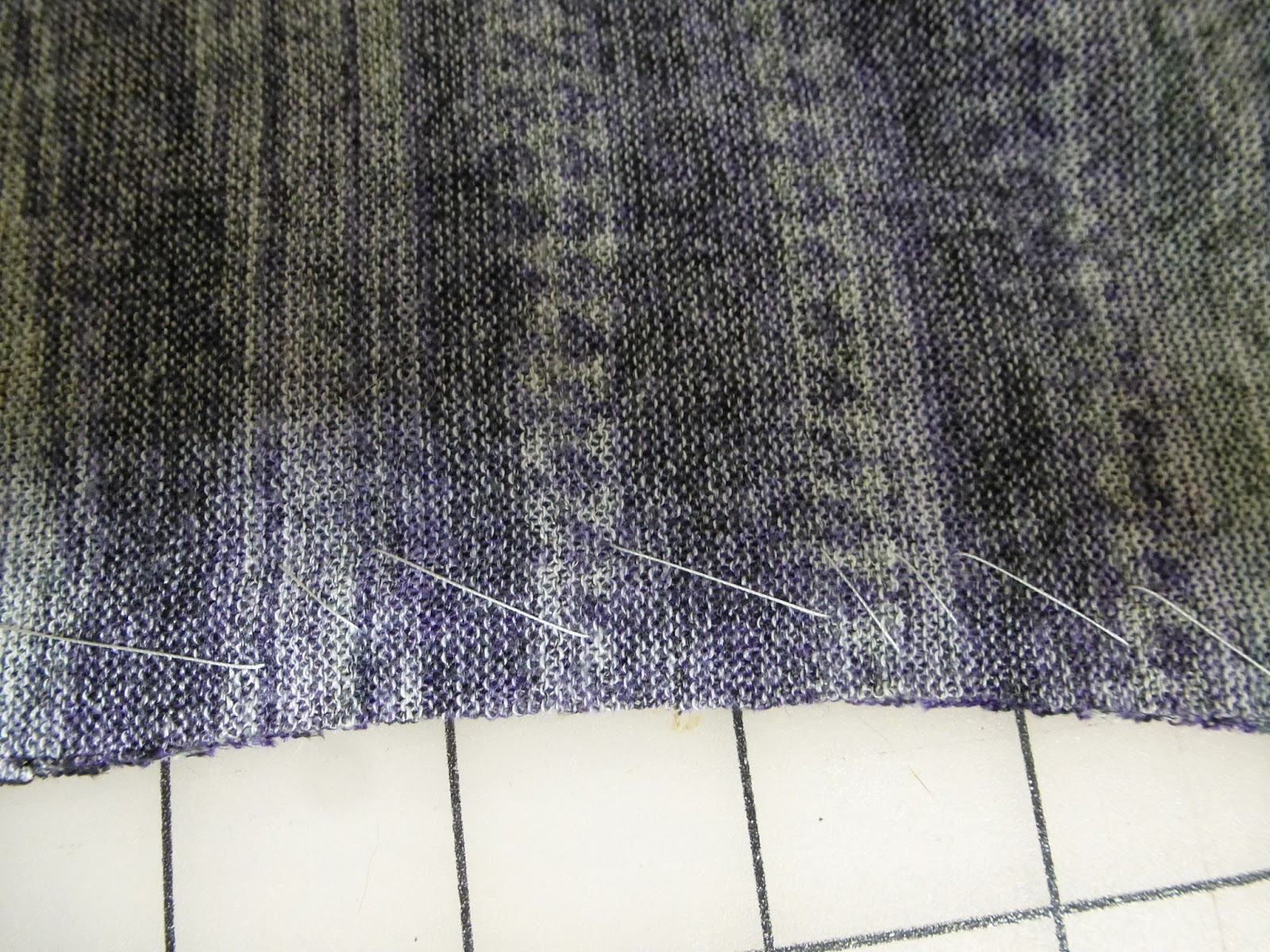 Basting is a  pain, and I hate to do it, but it is worth the trouble.  If I ever get lazy, don't baste, and use what I would call the "Hail Mary" approach, which means "just wing it and hope for the best",  I always regret the lazy choice.  In this case, I hand basted, then straight stitch basted, THEN serged.  The straight stitching first  provided  an extra bit of stability so that the serger would not push the seam alignment out of whack.

The neckline was easy.  I cut the fabric so that it was with a stripe on the straight of the fabric , joined the ends, folded it over, then applied it to the neckline with the serger. 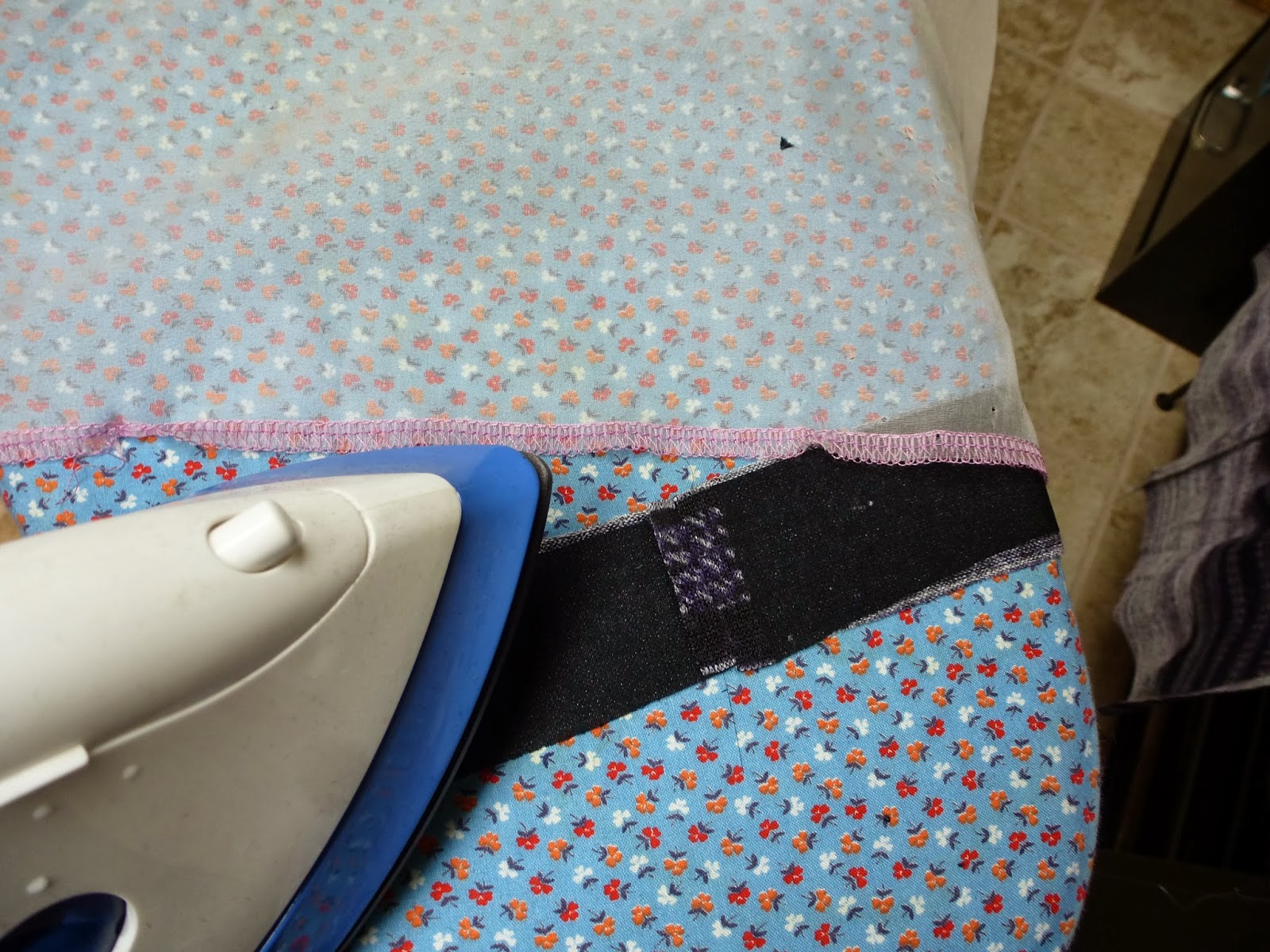 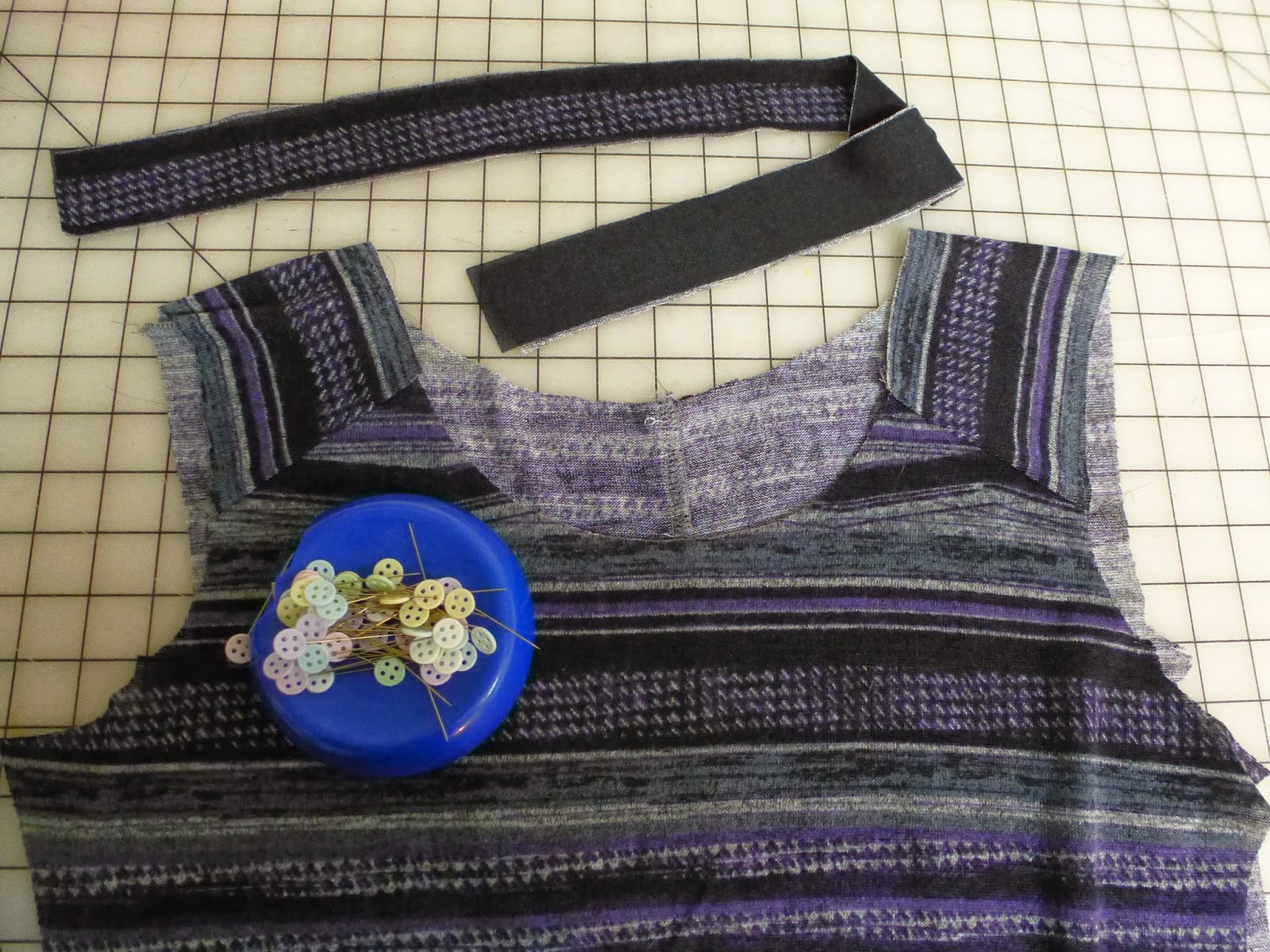 Posted by Barbara at Cat Fur Studio at 4:53 PM 6 comments: 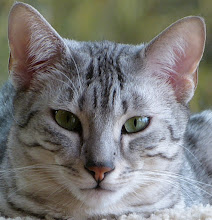 Other Sites and Links

A Garment's Not Worth Wearing Unless It's Sporting Cat Fur

When I'm Not Sewing, I'm Reading These